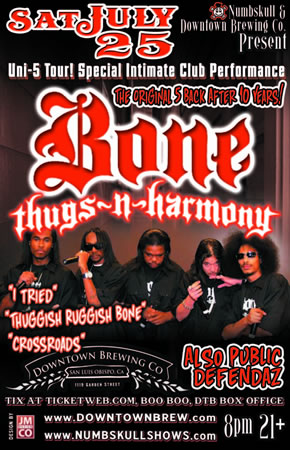 Back together again, with all original members  who specialized in interwoven, harmonious singing as well as rapping, Bone Thugs and Harmony are celebrating their reunion with a major tour. See them at Downtown Brew this Saturday, July 25th at 8pm with local act, the Public Defenders. We’re giving you chance to win a pair of tickets. A winner will be picked on Friday, July 24th.

Graced with a quick, sometimes sung delivery, Bone Thugs-N-Harmony burst out of the Midwest in the mid-’90s with a pair of massive hits (“Thuggish Ruggish Bone” and “Tha Crossroads”) along with a great album (E 1999 Eternal) and then quickly unraveled.

Eazy-E signed the group — initially comprised of Krayzie Bone, Wish Bone, Flesh-N-Bone, Layzie Bone, and Bizzy Bone — to Ruthless Records and released a debut EP, Creepin on ah Come Up (1994). The EP boasted “Thuggish Ruggish Bone,” a conventional G-funk song with an unconventional array of Bone Thug rappers that became an overnight summer anthem, especially throughout the Midwest. Amid the fervor, the Cleveland rap group entered the studio immediately and emerged with a remarkable album, E 1999 Eternal (1995). The album topped the charts and spawned a pair of popular singles, “1st of the Month” and “Tha Crossroads,” the latter a Grammy Award recipient.

The Beastie Boys have cancelled their tour and delayed the release of their album due to personal matters. (see YouTube video on the right)

NYC’s favorite sons; the Beastie Boys return to the Santa Barbara Bowl after their 2007 sold-out performance, for a pair of not-to-be-missed shows on Saturday, September 19 and Sunday, September 20.

The group’s forthcoming eighth studio album, “Hot Sauce Committee Pt. 1,” is due in stores Sept. 15. The set is the trio’s first release of new music since 2007’s “The Mix-Up,” and first collection of non-instrumental studio tracks since 2004’s “To the 5 Boroughs.” “It’s a combination of playing and sampling stuff as we’re playing, and also sampling pretty obscure records,” the group’s Adam “MCA” Yauch told a BBC reporter earlier this year. “There are a lot of songs on the record and there are a lot of short songs and they kind of all run into each other.”

Don’t miss your chance to see the Beastie Boys with very special guests at the Santa Barbara Bowl on Saturday, September 19 & Sunday, September 20 at 6pm. Tickets On Sale Saturday, July 25 @ 11am.

STILL NEED PLANS FOR THE FOURTH? LOOK NO FURTHER!

“The Mother Hips, a Bay Area quartet, hooked up nearly twenty years ago at Chico State. A couple of record deals and sabbaticals later, they continue to deliver a romping strain of countrified psychedelic power pop laced with traces of Merle Haggard, Barry Gibb, and the Eagles. Tim Bluhm and Greg Loiacano, the songwriters and front men, know how to sing it sweet and play it dirty.” -New Yorker Magazine

The Hips want to celebrate Independence Day with you! Gathering friends and family, they’re taking over the Henry Miller Library in Big Sur and throwing two full day events, closing each night. We’re offering two pair of full weekend passes. So no need to decide which day you want to see, cause the lucky winners will be seeing the whole affair. Enter below and check out the line-up. SOLID!

A winner will be picked Thursday morning. 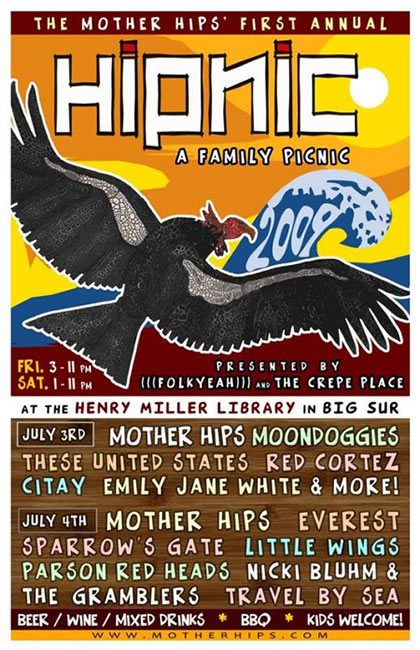